155 square metres of RonaDeck Resin Bound Surfacing was applied to the internal courtyard of Queens Court, a new affordable housing block built on the site of the old Queen’s Hall, a once popular music venue in Widnes.

The housing scheme was designed for Halton Housing Trust by award winning Liverpool architects, Denovo Design. Forrest Construction was the main contractor for the project which comprised 17 apartments with car parking and associated landscaping.

The new affordable apartments were built on the site of the iconic Queen’s Hall music venue, which had hosted many bands including The Beatles, The Stone Roses and The Happy Mondays but was demolished in 2012 following a fire. Part of the brief for the design was to commemorate the site’s musical heritage, so the building includes a full height showcase art work commemorating some of the many acts that performed there and colourful ‘guitar string’ louvres make a bold statement above each of the designated entrances.

The design for the new apartments needed to compensate for the lack of green space in the area and health and wellbeing was key to the design concept. All residents therefore have access to open space, with lounges having either an upper floor terrace; or a ‘Juliet balcony’. For ground floor residents an “outdoor space” was created in the form of a quiet, landscaped internal courtyard.

To create this outdoor space, flowering shrubs and semi-mature trees were planted around the inner courtyard to obscure the car parking bays and to provide a green outlook from the bedrooms. RonaDeck Resin Bound Surfacing Quartz Parallel aggregate mix was laid in a curved shape across the centre of the courtyard, providing a pale contrast to the surrounding greenery and red brick of the building. 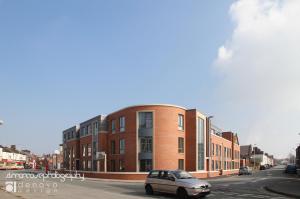 ing were sub-contracted to lay RonaDeck Resin Bound Surfacing across the 155 square metres of courtyard.

The RonaDeck Resin Bound Surfacing system was supplied as a two-component UV stable polyurethane resin and a blend of kiln-dried aggregates; the two resin components were mixed by Elite Surfacing with a slow speed drill and paddle before being added to a forced action mixer containing the Quartz Parallel aggregate blend. The RonaDeck Resin Bound Surfacing was spread to level before smoothing with a steel float.

RonaDeck Resin Bound Surfacing is a hard wearing, permeable (SuDS compliant) alternative to traditional paving and has the attractiveness of natural aggregate while being easily maintainable, unlike loose gravel. It is also suitable for wheel chairs and is slip-resistant. The resistance of the resin to ultra-violet light ensures that the resin will not yellow or darken over time, so the Quartz Parallel will retain its light appearance. 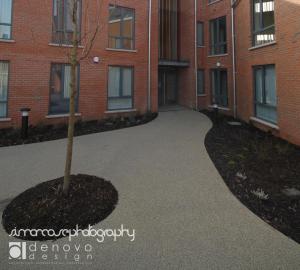 “RonaDeck Resin Bound Surfacing was specified because the Quartz Parallel aggregate mix contained a good selection of colour ways. The other important feature was that it suited the sinuous shape of the pathway unlike traditional paving, which would have necessitated a lot of cutting to shape and would have been more time-consuming and challenging to lay. The finished product in its inviting pale hue, looks immaculate and brightens up the enclosed courtyard.”

RonaDeck Resin Bound Surfacing is an integral part of the outdoor space provided for the health and well being of the residents at Queen’s Court apartments. Denovo Design was very pleased with its performance and appearance and will be considering its use for future projects.